Like many, MANY people in the ATL, I spent a looooooong time--8.5 hours WITHOUT a potty break, which is really like 205 bladder hours--in my car last Tuesday trying to get home in the snow and ice. In that 8.5 hours, which started at 12:45 p.m., I ate a handful of tiny little chocolate candies that I grabbed out of my desk, just in case it took me a couple of hours to get home--because I hadn't had lunch yet. And no water--but that was actually okay, since I had nowhere to pee.

Here's the first indication (besides, you know, the fact that I wasn't moving very fast on the interstate and it was snowing) that I wasn't going to get home for a while: 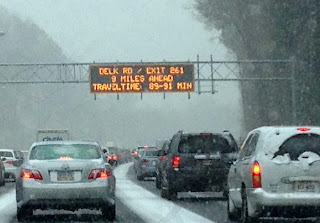 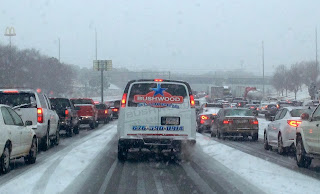 Here's my view for most of the ride. 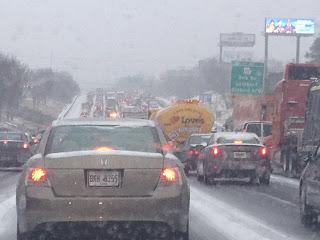 Here's the Delk Road exit (the one mentioned on the sign in the first photo). It was about 4:30 by this time. Nearly four hours since I'd left my office. 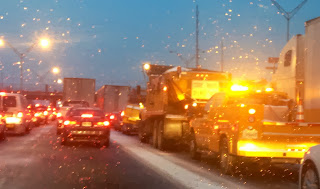 It was all fun and games until it got dark. Actually, that picture makes it look prettier than it was. Not only was I stuck in my car for-freakin'-ever, but I felt like I missed all the pretty snow. Snow ain't pretty on the interstate. And it was all done falling by the time I got home. 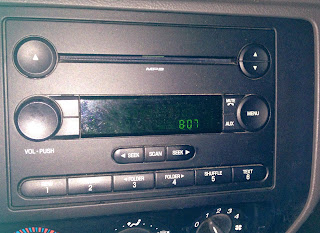 Here's my car clock, 7 hours into the journey--boredom and ridiculousness had clearly set in by this time.

After 8.5 hours in the car, I gave up. I crested a hill, about a mile from my house, and watched several cars slide to the bottom of the other side. And I was done. My car spent the night in a restaurant parking lot, and I walked the last mile home. 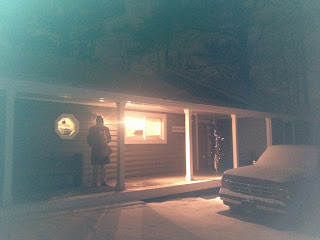 And I was luckier than the many who didn't get home that night at all. I know people who slept on buses, in Target, in their cars, at a stranger's house. A friend was forced to turn my sister's snow yellow at 4 a.m., because she was still a mile from home and just couldn't wait any more. Even had an acquaintance, who couldn't get home, spend the night at the Beach House.

Granted, there were some nice stories of people delivering food and water to folks stranded in their cars or opening their homes for potty breaks (clearly this became an important issue for me). But, really, it sucked for whole lot of people. 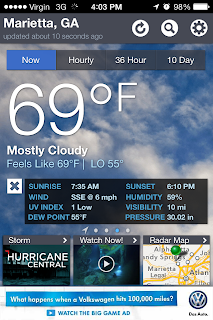 When life is too good for just a smiley face ... 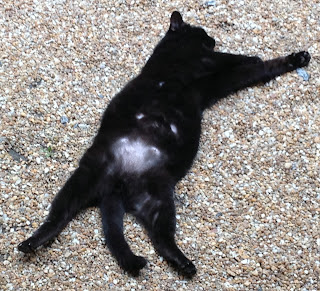 Posted by Karen K. Kennedy at 7:57 PM No comments:

You cain't sling a dead cat without hitting a really, REALLY old pile of rocks in Greece -- something that continues to amaze this Atlanta resident. Where I come from, old is the late the 1800s. If something from before THE war (you know the one I mean) exists, it's ancient. We just don't have a lot of old sh*t laying around.

But, in Crete, you get such an appreciation for old, and for history, and for living with your past (we still tear a lot of old stuff down around here). Not to mention a sense of wonder for how anything Greek still survives, given a history that includes conquering and occupation by the Romans, the Venetians, the Turks, the Germans. The list seems endless. We think America is a melting pot, but you want to see a melting pot that stretches back centuries, go to Greece. Spend a week in Crete for a journey that will take you back thousands of years -- and that doesn't even include the Homo Sapiens Museum. 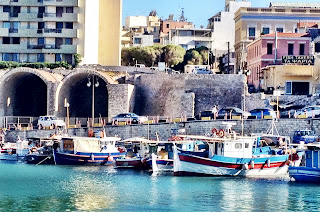 When you land in Iraklion, it's the largest city in Crete and where most planes and ships land--or dock--you immediately see the way modern architecture incorporates ancient ruins. This is the marina or harbor, I'm not so good with the ship language. The stone arches are Venetian, that makes 'em about 900 years old or maybe only 500 years old--I write, I'm not so good with math. And now cars drive under them all day long. Probably not what the Venetians had in mind when they built them. 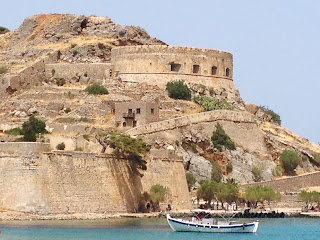 The Venetians also built this fortress on Spinalonga, a tiny island just off the northern coast of Crete. Then one day, the Turks took over the island--along with other parts of Greece. When the Greeks finally defeated the Turks in the late 1800s, several Turkish families refused to leave Spinalonga, that is, until the Greek government decided in 1903 to make it leper colony. I don't believe the Turks let the door hit 'em in the ass on the way out after that. 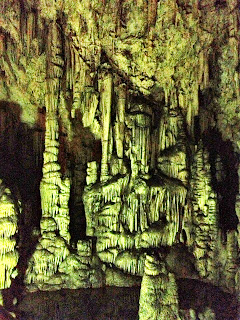 Even earlier than the Venetians, the Greek gods made their mark on Crete. This is the Dikteon Cave, said to be the place where Zeus was hidden by his mother, Rhea, so his father Kronos wouldn't eat him. Kronos apparently had an appetite for baby gods to be. But, Rhea's ruse worked. Zeus grew up and defeated Kronos, who promptly threw up all of Zeus' siblings that he'd eaten earlier. The bunch of them ruled as the Greek gods from Mt. Olympus for years. Mostly, I just tried to imagine how a really pregnant woman managed to climb down into this really deep, dark hole. But, I guess she was pretty motivated. 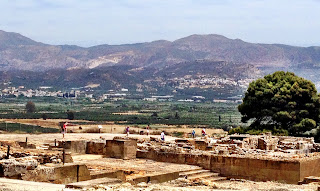 Phaestos is a Minoan palace site (that's archeology talk for really big pile of rocks). The Minoan period was 3,000-1,000 BC. The Minoans are said to be Europe's first "civilization." That means they had real pretty stuff and some of it exists to this day. Phaestos was great. A beautiful site, gorgeous view, and we took my sister, the anthropologist who has spent a LOT of time in Crete--it's a tough job, but somebody has to do it--so we know that some of the piles of rocks that we saw might have been bathrooms or bedrooms or theaters or something. But, it was definitely a palace, they think. 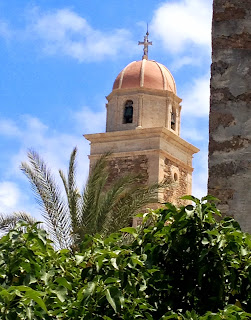 All the history in Crete isn't ancient. Some of it dates to WWII. Crete is the southernmost island of Greece, not too far from Africa, which is what has made it such a desirable place over the centuries. Even the Germans wanted it during the second World War. This monastery--still in use today--was home to a band of resistance fighters, who operated an underground radio. When the radio was discovered, the Abbott of the monastery was executed.

You say time travel isn't possible yet. But I say you're wrong. In Crete, you can travel from the time of the Greek gods to World War II in a week. And find yourself wondering how there's any Greece left.

Posted by Karen K. Kennedy at 9:31 PM No comments:

There goes the neighborhood!

One of our new across-the-street neighbors--a family of four. You reckon our property values will go up if we talk about the wonders of free-range, fresh goat cheese right here in the 'hood? 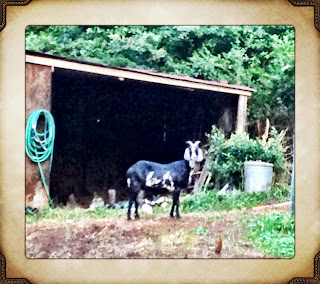 Posted by Karen K. Kennedy at 8:31 PM No comments:

While the new royal baby, George Alexander Louis, has an awful lot going for him--a mouthful of name, money and his pick of fabulous castles to call home--his new parents may need some parenting tips, and I'm not sure they have the best role models to turn to.

In case they want to swim outside the Royal Gene Pool for parenting help, I'd like to offer up these tips from my dad, who's been a parenting King for longer than I can remember!

1. Love unconditionally. Dad loves cars a lot. This was brought home to me when in the months following me getting my driver's license I hit everything in sight--and many things that were out of sight--poles, the garage, an MG convertible driven by a nasty man in a mustard-colored suit smoking a huge, smelly cigar. And as hard as it was to call Dad and tell him I'd hit something else, it was never because I thought he'd stop loving me. Keep this in mind when little George throws the royal crest, just to see if it will break or teenage George plows the Rolls into the side of the palace.

3. Step outside the castle every now and again. Develop your own interests. It will make you more interesting to your child--and others. Daddy flies planes ... 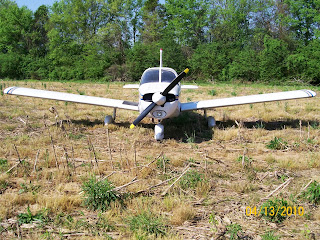 (even landing them in the occasional corn field)

and rides motorcycles--sometimes with Mom strapped to the back. 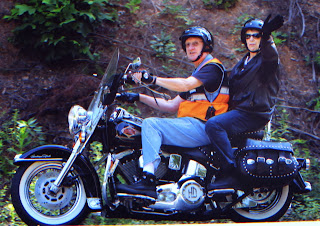 4. Sing. I grew up with country music coming out of the radio and out of my dad's mouth--which of course I hated. But now, I wouldn't trade the sound of my dad's singing voice in my head for anything. And, while I don't sing so much, I do love music and play in a band.

5. Plan to keep on parenting long after the prince is grown. Don't get too busy being king and queen to check in on your prince--and whoever else might come along. Kids never stop needing their parents.

6. Stay married if you can. I am grateful every day that my parents are still married to each other and still live in the house I grew up in. Buck recent royal family tradition and try to stick it out for the long haul. 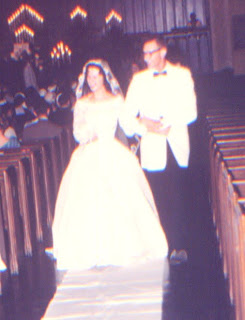 Finally, Kate and Will, if you need a few more tips, check out these things my Dad taught me over the years. Things that continue to be important to this day. Congratulations on the new little prince! Try to raise him right!

Posted by Karen K. Kennedy at 9:00 AM No comments:

Beach House in the Burbs

Karen K. Kennedy
One day I'll live at the beach. Until then, I reside in a wannabe beach house in a land-locked suburb of Atlanta with a long-suffering husband, five cats and a dog.